Through newspaper headlines printed at the time, you can revisit the most memorable events in New York Yankees history.

Relive all the Bronx Bombers’ greatest moments with this personalized Yankees gift: The New York Yankees history book. Made from newspaper headlines of the time from the New York Daily News, and with coverage beginning in 1923, the year of the franchise’s first World Series title, this exquisite Yankees history book guides you through the decades, revisiting all the key moments from both Yankee Stadiums, right up until the present day. Now updated with the 2022 season that saw Aaron Judge who now stands alone atop American League history books with 62nd HR of
season.

By far the most decorated side in the history of professional baseball, the New York Yankees have won an unprecedented 27 World Series titles, well over double the amount of any other team. So impressive is this tally that it is also unmatched by any franchise in any of the Big Four North American sports. The Yankees have also captured a record 40 American League pennants, including an incredible 29 in 44 years between 1921 and 1964, registering 43 winning seasons in the process. During this period, the Yankees boasted a whole host of legendary players who would go on to be mentioned in each and every “greatest of all time” conversation, most notably Babe Ruth, Lou Gehrig, Joe DiMaggio and Mickey Mantle. The Yanks’ most recent triumph came in 2009, defeating the Phillies 4-2 to claim their first World Series in nine years.

How to Personalize Your Yankees Book

To truly make this Yankees book a timeless gift, you can include the individual’s name and a message printed on a certificate on the opening title page. Their name will also be embossed on the front cover free of charge. The hardcover is bound in premium leatherette. 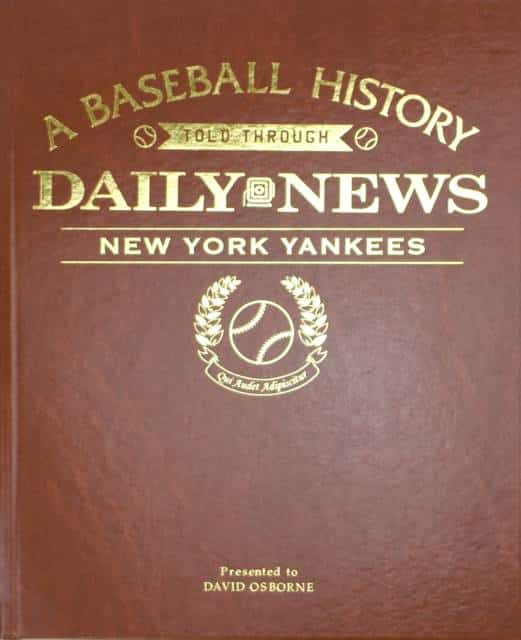 Awesome book. Christmas present for my husband and I know he’ll love it!

I am still waiting for my items to be delivered. Once I receive them I’ll be able to give a better review. I hope I am going to receive them.