Through newspaper headlines of the time, you can relive all the greatest moments in Tennessee Titans’ history.

Relive all the greatest newspaper headlines in the history of both the Houston Oilers and Tennessee Titans with this personalized Tennessee Titans book. With coverage beginning in 1960, the year of the franchise’s debut season, this wonderful piece of Tennessee Titans memorabilia guides you through the decades, revisiting all the key moments from Houston and Tennessee, right up until the impressive 2021/22 season.

The teams of the Houston Oilers and the Tennessee Titans have something in common besides a shared franchise: they both hit the ground running at the start of their existence. In 1960, the inaugural season of the AFL, the Houston Oilers, in their own first season, won the Championship after a 24-16 victory over the Chargers. The matchup would be revisited in the following season’s Championship Game, with the Oilers once again coming out on top. The Oilers made the move to Tennessee in 1997, playing two 8-8 seasons as the Tennessee Oilers before changing their name to The Titans, complete with a new club logo. Tennessee’s first season as the Titans saw them march all the way to the Super Bowl. They would ultimately fall short by a yard, quite literally, as in the final play of the game, with Tennessee trailing St. Louis by 7, Titans wide receiver Kevin Dyson was stopped one yard short of the goal line in a play that would go down in NFL folklore forever as “The Tackle”.

How to Personalize Your Tennessee Titans Book

To truly make this Titans book a timeless gift, you can include the individual’s name and a message printed on a certificate on the opening title page. Their name will also be embossed on the front cover free of charge. The hardcover is bound in a premium leatherette. 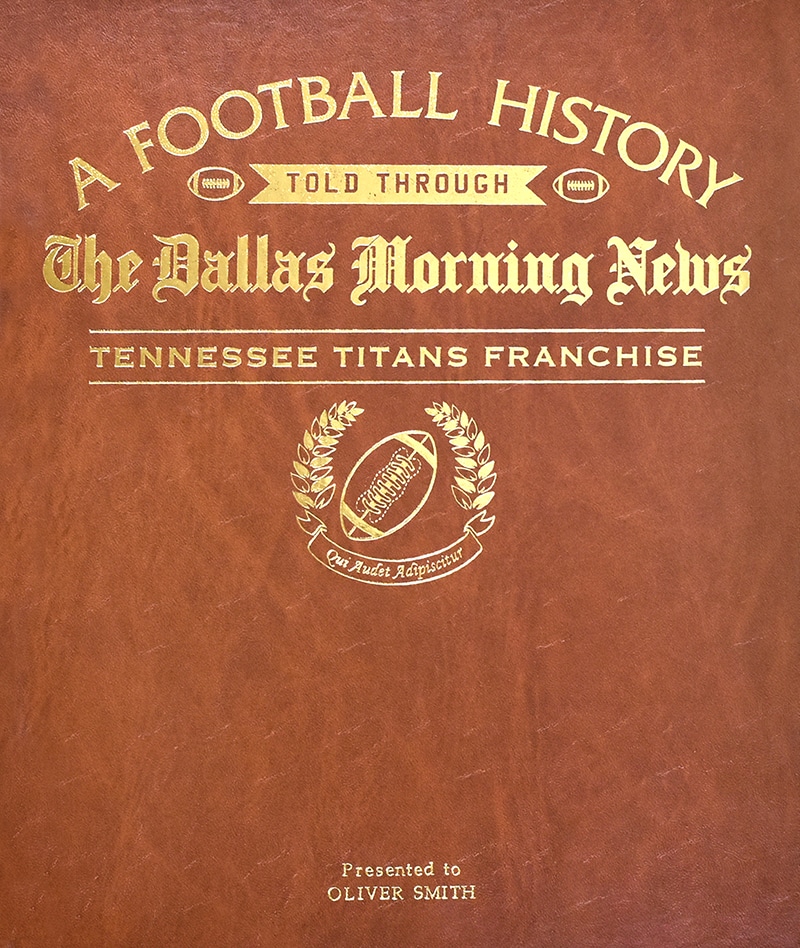