Through newspaper headlines printed at the time, you can revisit the most memorable events in Los Angeles Dodgers history.

Relive all the greatest moments of the Blue Crew with this fine piece of Dodgers memorabilia: the personalised Los Angeles Dodgers book. Made from newspaper headlines of the time, and with coverage beginning in 1940, this Los Angeles Dodgers book guides you through the decades, revisiting all the key moments from Los Angeles and Brooklyn, right up until the present day. Now updated to include the 2022 season which proves they are the best in the West again.

Founded in 1883, Dodgers fans would have to wait until 1955 for the team’s first World Series title, incredibly at the eighth time of asking. The Major League’s first black player Jackie Robinson, who had been present for the last four defeats stretching back to 1947, finally led the then-Brooklyn Dodgers to the title via a 4-3 victory over the team that had beaten them in five of their seven World Series losses: the New York Yankees. In total, the Dodgers have won six World Series titles (two each in the 1950s, 60s and 80s) as well as 22 National League pennants, the second-most of any team. The Dodgers also hold the distinction of having the most Rookie of the Year winners, twice as many as any other team, with Robinson being the first.

How to Personalize Your Dodgers Book

To truly make this Dodgers book a timeless gift, you can include the individual’s name and a message printed on a certificate on the opening title page. Their name will also be embossed on the front cover free of charge. The hardcover is bound in premium leatherette. 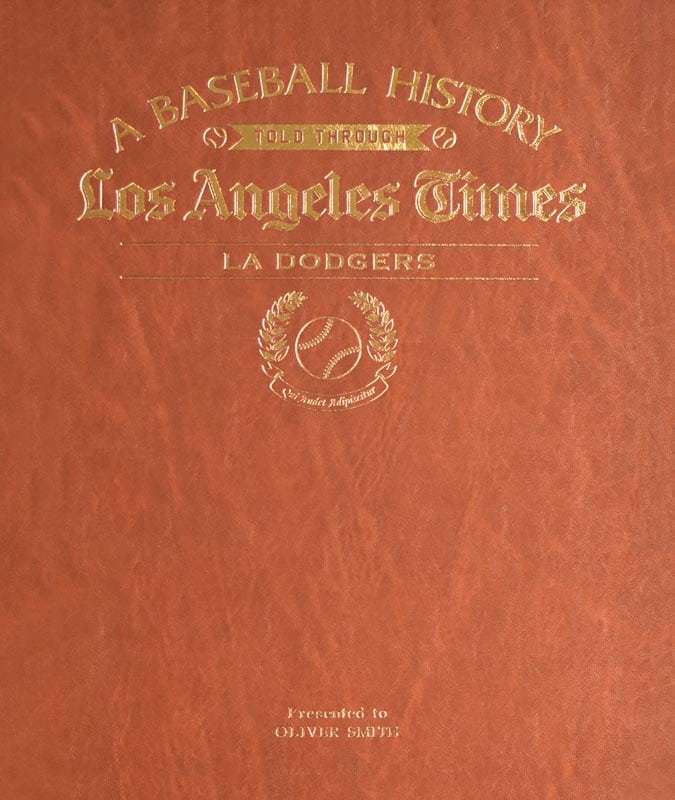 Excellent! slight problem - full stop not engraved on front or certificate, after initial A.

I still havent received it

Very classy.... beautiful one of a kind book

My husband was so surprised and didn’t want to put it down!