Through newspaper headlines of the time, you can relive all the greatest moments in the Baltimore Raven’s history.

2020 marked another impressive season for Baltimore, as the Ravens finished 11-5 and made the playoffs for the third consecutive year. Now, through newspaper headlines of the time, you can relive some of the year’s high points, along with all the greatest moments in Ravens football history, with this fine piece of personalized Ravens memorabilia: the Baltimore Ravens history book. With coverage beginning in 1996, the year of the franchise’s foundation and debut season, this Baltimore Ravens book guides you through the decades, revisiting all the key moments from the M&T Bank Stadium and beyond, right up until the present day.

Elected to the NFL in 1996 as an expansion team, the Baltimore Ravens’ foundation was half creation, half relocation. Art Modell had reached an agreement to move his Cleveland Browns team, but only on the condition that the franchise’s intellectual property would remain in Ohio. Thus, the Ravens were born, themselves a replacement of sorts for the Colts that had left Baltimore for Indianapolis a decade earlier. The Baltimore Ravens hit the ground running, winning the Super Bowl in only their fifth season, a 34-7 demolition of the Giants with future Hall of Famer Ray Lewis leading the charge. In the first thirteen years of the 21st century, beginning with that Super Bowl win, the Ravens reached the playoffs nine times, ending with another Lombardi Trophy following a 34-31 win over the San Francisco 49ers.

How to Personalize Your Ravens Gift

To truly make this Ravens book a timeless gift, you can include the individual’s name and a message printed on a certificate on the opening title page. Their name will also be embossed on the front cover free of charge. The hardcover is bound in a premium leatherette. 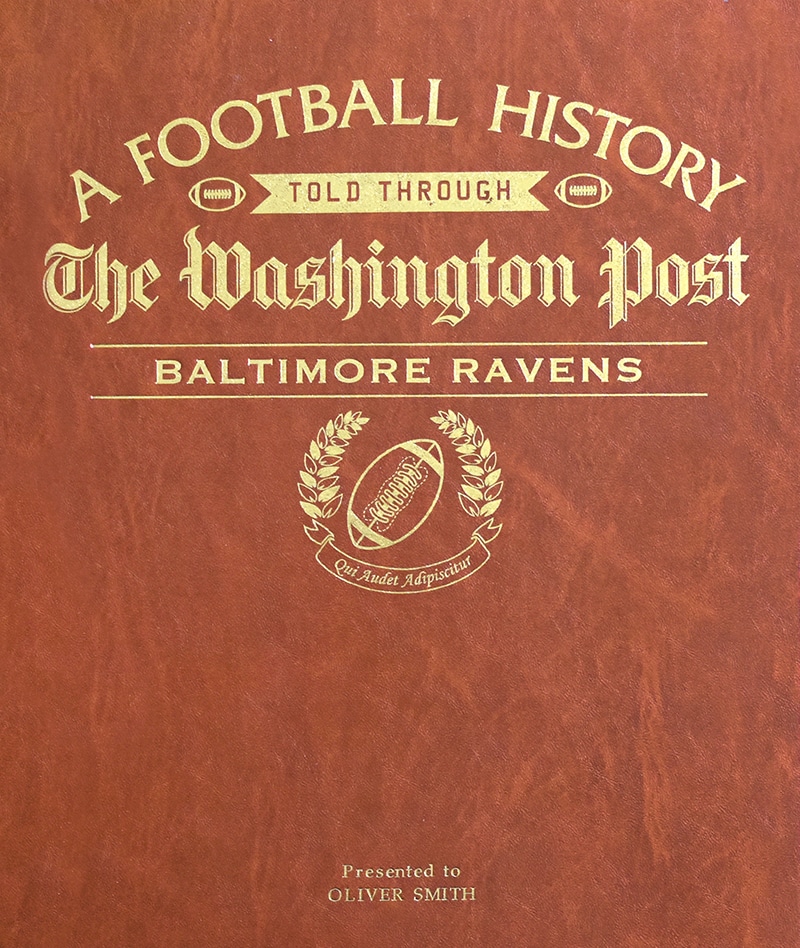 Eloquent, unique, informative, and pleasing to the eye