Via newspaper clippings from the past, you can relive the wonderful history of The Wimbledon Championships.

Relive all the most memorable moments in Centre Court history through newspaper clippings in this personalised Wimbledon book, now updated with the latest coverage of Wimbledon 2021. With coverage beginning in 1913, the first time the championship included Women’s Doubles and Mixed Doubles competitions, this exquisite tennis book takes you through over a century of history, revisiting all the key moments from SW19, right up until the present day. Now includes the incredible 2022 finals coverage. Where we saw Novak Djokovic defeat Nick Kyrgios in the men’s single final and Elena Rybakina’s win over Ons Jabeur in the women’s final.

Beginning in 1887, Wimbledon is still widely regarded as the most prestigious championship in the tennis calendar. Held exclusively at the All England Club in London since its inception, it has attracted competitors and winners from all over the world, but for British fans, the championships were long synonymous with heartache and disappointment. After Fred Perry’s championship triple from 1934 to 1936, an incredible 77 years would pass before another British Men’s Singles champion.

During that time, Centre Court would see Rod Laver win four titles, followed by Americans Jimmy Connors, John McEnroe and Arthur Ashe battling Bjorn Borg (as well as each other), with their combined total of six titles sandwiching the Swede’s five-in-a-row. At the end of the century, Pete Sampras won seven, a feat repeated by Roger Federer shortly after. In the Women’s Championship, Billie Jean King won six, Steffi Graf seven, and Martina Navratilova nine, while Britain enjoyed some fleeting successes via Ann Jones and Virginia Wade, before the Williams sisters took hold of SW19, winning twelve titles between them in a 17-year period from the start of the 21st century. And then, at long last, in 2013, a year after he had lost in the final, Scotsman Andy Murray finally broke the British hoodoo by defeating top seed Novak Djokovic in straight sets. 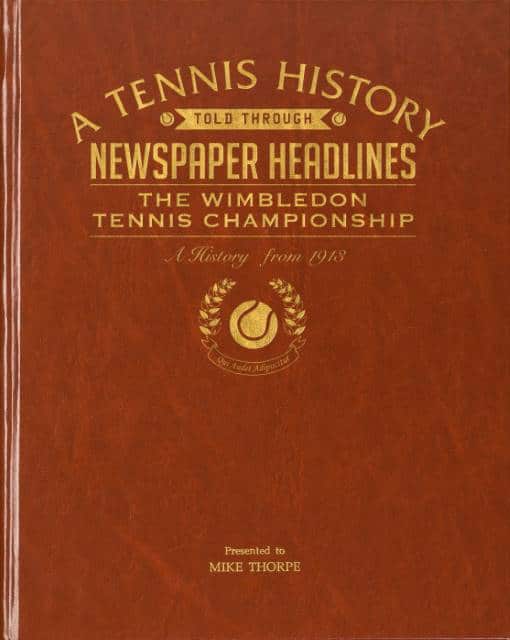 A 65th birthday gift for a keen player and tennis fan - the recipients pleasure on receipt said it all. A good quality product that will grace a coffeee table and clearly provide hours of enjoyment and maybe a constant source of reference.

I bought the Wimbledon Tennis history online as a gift for my brother's 60th. and as he is a fanatic tennis collector with a rare collection, and also a writer for tennis magazines, this had to be unique and different, and it so was. This book is beautifully done, and will be treasured by my brother as part of a great collection, especially as I was able to put his name in gold on the front cover. Packaging was first-class and delivery to Australia was fast. Would recommend this site and this book to any collector of sporting memorabilia.

Really pleased with the book and the size of it - big enough to make it even more special! It has a real quality feel and the embossing on the front made a lot of difference. The person receiving the book was thrilled and eveyone that looked at the book said what a wonderful idea it was.

Amazing quality and content! A special gift that was received with great pleasure. The personalisation was beautiful .

Only thing that would make it better is presentation box