Via newspaper clippings from the past, you can relive the wonderful history of The Open Championship.

Relive the history of The Open golf championship through newspaper clippings in this personalised Open golf book. With coverage beginning in 1934, the year of Henry Cotton’s first win, this timeless piece of golf memorabilia takes you through decades of history, revisiting all the key moments from Muirfield, Royal Liverpool, St. Andrews and many more, right up to Cameron Smith win at the 150th Open at St Andrew’s.

The oldest of the four golf majors, and the only one to be annually held outside of the United States, the first Open Championship took place in 1860 at Prestwick Golf Club. Prestwick would be its home for the first twelve years, and the competition would remain exclusively in Scotland until 1894, when it was played at St. George’s, and won by Englishman J.H. Taylor, only the third ever non-Scottish victor. Taylor would go on to lift the trophy five times, a feat bettered by only one man in history, Harry Vardon, who won six. The 1950’s were dominated by Australia’s Peter Thomson, who incredibly won four times in five years, and in the 1960s and 70s, Jack Nicklaus became the competition’s nearly man, finishing as runner-up a record seven times, though the American would go on to lift the trophy three times too. In 1985, Sandy Lyle became the first Scot to win The Open in 65 years, by the smallest margin of one stroke. And in 2016, Henrik Stenson won the trophy with the greatest under-par score of all time, registering a -20 at Royal Troon. 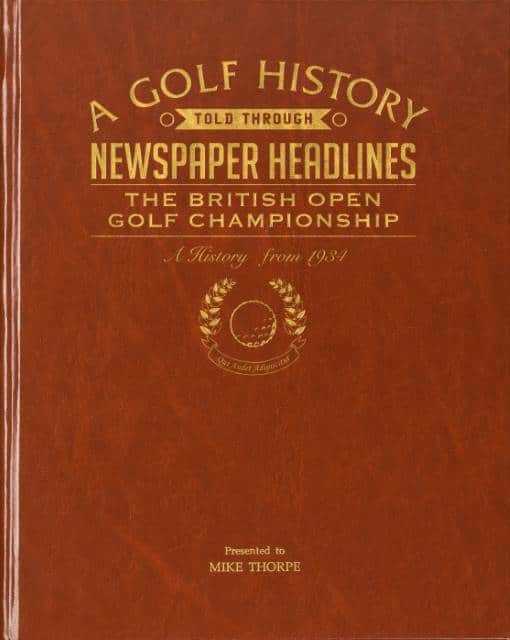 Bought this for my hard to buy for Dads birthday, he totally loved it. The beautiful leather cover and having it personalised makes it really special. Was a huge success and was so nice to get something so unique.

It was a gift for a friend and he was over the moon. It really was the perfect gift for a golf fanatic and it arrived very quickly after ordering.

Bought The Open Golf Book for my brother on his retirement from a championship golf course and he was thrilled with the quality and content of this book. A lovely memento he will cherish forever.

Recently bought for my fathers 8th birthday. With the age he is it's always difficult to find something different as over the years I must have bought him everything to do with golf. This was a great find he absolutely loved it .Starting from 1934 the year before he was born right up to date. Get it personalised to make it extra special.