You can relive the history of Sheffield Wednesday through over a century of newspaper headlines.

Relive the history of Sheffield Wednesday football club through newspaper clippings in this personalised Sheffield Wednesday book. With coverage beginning in 1907, this magnificent Sheffield Wednesday gift takes you through over a century of history, revisiting all the key moments from Hillsborough and beyond, right up until the present day. Now includes the 2021/22 season which saw a 4-1 win over Cheltenham.

One of the oldest football clubs in the world, Sheffield Wednesday was formed by members of The Wednesday cricket club in Sheffield. Competing under the name “The Wednesday”, they won two league titles and two F.A. Cups in the late 19th and early 20th century, before changing their name to Sheffield Wednesday in 1929. Success followed instantly, with the new name inspiring the side to two consecutive Division One titles in 1929 and 1930. Wednesday would earn a reputation as a yo-yo club in the second half of the century, finishing as low as 20th in Division Three in the 70’s but in the top five of Division One in the other four decades. Their most recent major trophy came in 1991 as they defeated Manchester United to win the League Cup. Two years later, they would reach the final of both the F.A. Cup and the League Cup, losing to Arsenal both times.

Take a look at the Sheffield Wednesday contents list 2021 to see which historic moments are captured.

Our books are available in a variety of covers and can be customised accordingly. Each book features your recipient’s name and a special certificate message of your choice printed on the opening title page. A luxury gift box is also an option for long-term protection. 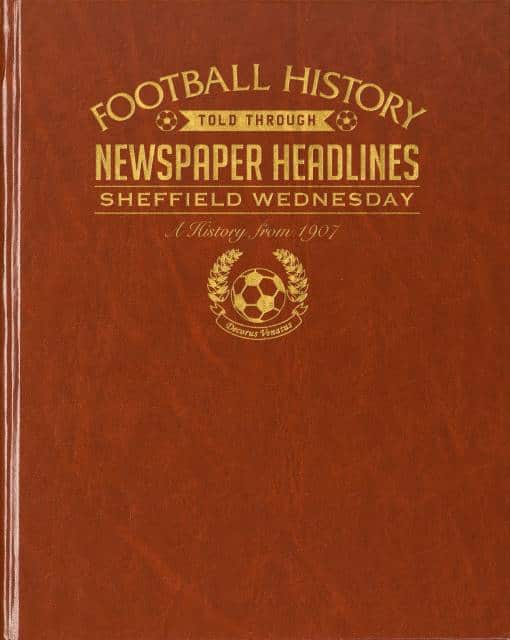 Fantastic gift, my friend loved it. 👍👍

This was just as advertised.

A great reaction from the recipient🧨.