You can relive the history of Burnley FC through over a century of newspaper headlines.

They’ll never take the Longside! Reacquaint yourself with the history of Burnley football club through newspaper clippings of the time in this personalised Burnley book. With coverage beginning in 1913, the year of their promotion to the First Division, this fine piece of Burnley football memorabilia takes you through over a century of history, revisiting all the key moments from Turf Moor and beyond, right up until the present day.

A year after their promotion, Burnley won their first F.A. Cup in a 1-0 win over Liverpool. Seven years later, they ended the 1920/21 season as league champions of England, notching a record of 30 straight games unbeaten, which would stand until Arsenal’s 2004 Invincibles team. But the golden era for the Clarets came following the Second World War. After gaining promotion in 1946, Burnley spent a quarter of a century in the top flight, reaching two F.A. Cup finals, winning the league title again in 1960, and reaching the quarter finals of the European Cup a year later. After a spectacular fall from grace, Burnley found themselves in the fourth tier in 1980’s, retaining their league status by the skin of their teeth after a dramatic 2-1 victory over Leyton Orient on the final day of the 1986/87 season. In recent years, Burnley’s fortunes improved, led by Sean Dyche to the promised land of the Premier League.

Our football books are available in a variety of covers and personalisation. Each book features the recipient’s name and a message printed on a certificate on the opening title page. A gift box is also available for long-term protection. 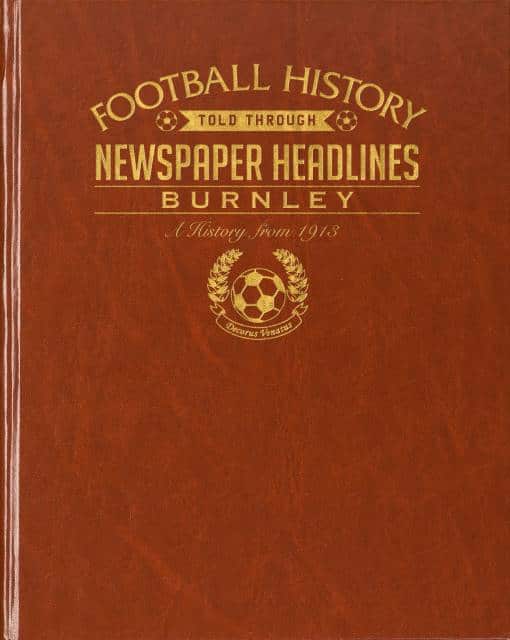 This was a gift for my son in law. I haven’t had his reaction yet but I think this is a lovely gift. I got the presentation box too which will keep it safe.

All the writing is too small to read so it is not worth the £50 at all I am very disappointed. Was for my husbands 30th and I’m now ashamed to give it to him.

A real treat for fans following home team football over the many years past up to present day.

Plenty of reading for the hubby to do.

I bought this book for my partner who has been a life long Burnley supporter. He thought the book was fantastic, well printed and he loved reading all the reports and remembering which games he had been to.