Skip to content
Delays Expected due
to Royal Mail Strikes
25% OFF! Cyber Week
Use Code: CYBER25
Browse Our Bestsellers
Excellent
8106 reviews on

You can recount the key events in Manchester United’s European history exactly as they appeared in print at the time.

Relive the European history of Manchester United football club through newspaper headlines of the time in this personalised Manchester United in Europe book. With coverage beginning in 1956, their year of their first ever European Cup game, this fine piece of United memorabilia guides you through the decades, revisiting all the key moments from the European Cup to the Europa League, right up until the present day.

United have captured six major trophies on the continent since: 3 European Cups, a UEFA Cup Winners’ Cup, the Europa League, and the European Super Cup, all of which are covered in this book. The first triumph was in 1968, when Sir Matt Busby’s side came alive in extra-time, scoring three goals in seven minutes to topple a Benfica side led by Eusebio and become the first English team to win the European Cup. The most recent success was the 2016/17 Europa League, where Mourinho’s men swept aside Ajax in the final. But without question the greatest night in United’s European history came at the Nou Camp in 1999, as Sir Alex Ferguson’s team, trailing Bayern Munich since the 6th minute, scored two goals in injury time via substitutes Teddy Sheringham and Ole Gunnar Solskjaer to not only win the Champions League but also complete an historic league, cup and European treble, the only English club to ever achieve such a feat.

How to Personalise Your Manchester United Book 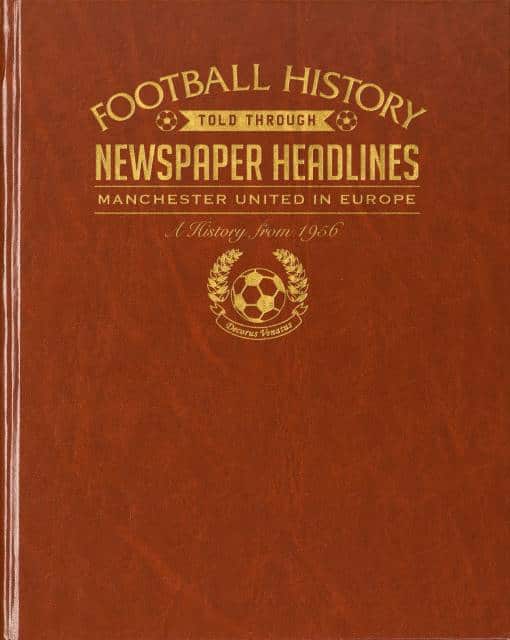 Bought this as a thank you present for my dad. He loved it. Delivery was quick and product excellent.