You can relive the history of Leicester City through over a century of newspaper headlines.

When you’re smiling, the whole world smiles with you! Relive the history of Leicester City football club through newspaper headlines through the ages in this personalised Leicester City book. With coverage beginning in 1908, the year they gained promotion to the top flight for the first time ever, this magnificent piece of Leicester City memorabilia guides you through over a century of key moments from Filbert Street, the King Power stadium and beyond, right up until the present day. Relive the Europa Conference League  and a 1-0 victory for Leicester (PSV Eindhoven 1 Leicester 2)

For a long time, Leicester City could have been described as English football’s nearly men. Four times F.A. Cup finalists with no wins (a record), seven times Second Division/Championship winners (also a record) but with nothing to show for it in the top flight, save for finishing runners-up in the 1928/29 season by a single point. But that all changed in the 2015/16 season, as the Foxes pulled off what many have called, with good conviction, the greatest sporting upset of all time.

Having survived relegation the previous season against all the odds, Leicester parted company with the man given credit for the feat, Nigel Pearson. As a result, most pundits had Leicester favourites to finish rock bottom of the Premier League. Instead, they did the unthinkable, winning the league with two games to spare, in a season that also saw Riyad Mahrez win Player of the Year and Jamie Vardy break the record for most consecutive games with a goal. Then, five years after exorcising their league demons, the Foxes finally won the F.A. Cup, defeating Chelsea 1-0 thanks to a Youri Tielemans screamer.

The Foxes’ achievements over the past few years have been nothing short of remarkable, and truly rank as some of the greatest sporting, let alone football, triumphs of all time. You can relive the greatest moments from them in glorious colour articles.

Each book features the recipient’s name and a message printed on a certificate on the opening title page. A gift box is also available for long-term protection. 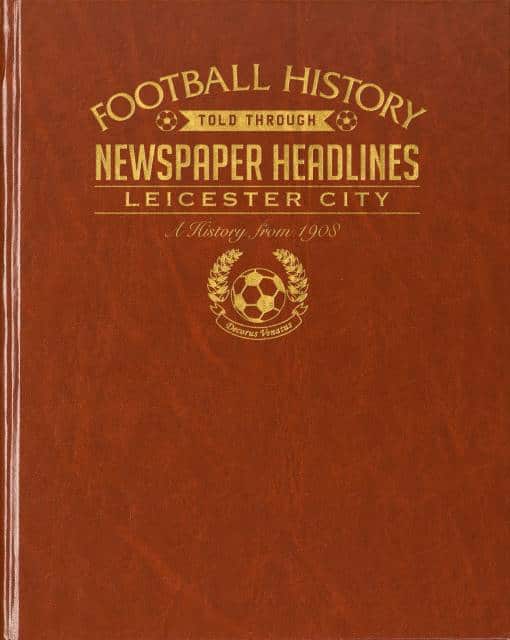 I have received 2 emails to review a product I have not even received yet.

The book looks very nice in its box . But the print is so small and very difficult to read.

Good service, good product, exactly as described. Shipping was quick, would recommend and use again.

Beautiful book at a prime price. If you can afford it then get it. This was for sons 21st birthday hence I paid much more than I would normally be comfortable paying.