Via newspaper clippings from the past, you can relive the exhilarating history of Formula One

Revisit the greatest Grand Prix races in history through newspaper clippings in this personalised Formula One book. With coverage beginning in 1958, the year Mike Hawthorn became the first ever World Drivers’ Champion, this timeless F1 gift takes you through decades of Formula One history, revisiting all the key moments from Monza, Montreal, Monte Carlo and more. As well as these fascinating moments, our book is now updated to include the 2022 season.

Beginning in 1950, the early years of Formula One belonged to drivers from Italy and Argentina in the Italian vehicles of Alfa Romeo, Maserati and Ferrari. That was until Mike Hawthorn’s 1958 championship ushered in a period of British and Australian dominance, with Jack Brabham, Jim Clark and Graham Hill all winning multiple titles during the next decade. The 1970s brought Jackie Stewart and the Austrian Niki Lauda, who won three championships apiece, before a spell of French and Brazilian success, courtesy of Alain Prost, Nelson Piquet and Ayrton Senna, who won ten championships between them from 1981 to 1993, before the latter tragically lost his life in a crash at the 1994 San Marino Grand Prix.

Around the turn of the century, Michael Schumacher became the most successful driver of all time by winning seven Driver’s Championships, including five-in-a-row from 2000 to 2004 while racing for Ferrari. His fellow countryman Sebastian Vettel almost matched the feat a few years later, capturing four straight, but was denied a fifth by Lewis Hamilton, his second of seven championships to date.

Your Personalised Formula One Book 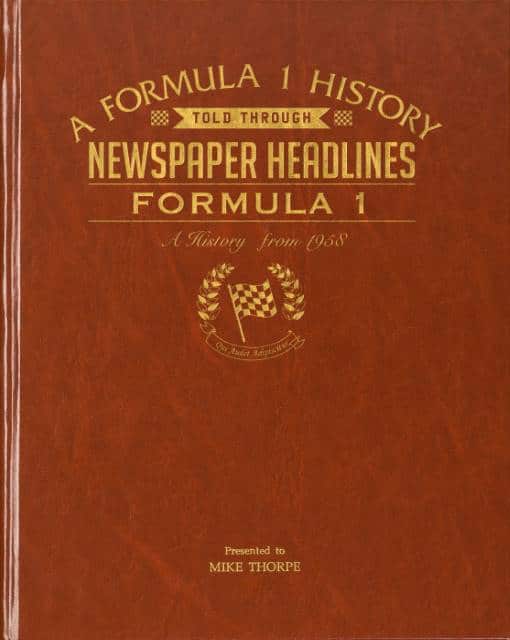 Excellent memorabilia about motor racing over the years definitely worth it

Disappointed thought it would have been bigger considering the price

Great gift. Well presented. Loved the ability to personalise it. Sent in good time. Looked better quality than I expected.